HeliRussia and Show Observer: a decade of partnership 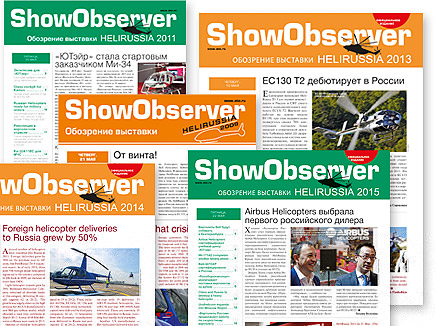 The anniversary, 10th edition of the international helicopter industry exhibition HeliRussia 2017, which will take place on May 25 to 27 at Crocus Expo center in Moscow, has once again chosen its traditional partner Show Observer as its official daily. The publication is produced by one of Russia’s oldest aviation business magazines, Air Transport Observer, and has been providing coverage of the HeliRussia since the first event in 2008.

In the show’s anniversary year, the boosted team of Russia’s top aviation journalists will be reporting from the HeliRussia 2017 floor. Two issues of Show Observer HeliRussia to be published on May 25 and 26 will cover the most important news and events of the country’s main helicopter convention, which will feature expanded program and exhibitor lineup this year.

The daily Russian/ English Show Observer issues with the total of 10,000 copies will be distributed free of charge at all the booths and among show participants. They will also be available on ATO.ru web-portal and through special ATO app for mobile devices available through App Store and Google Play.