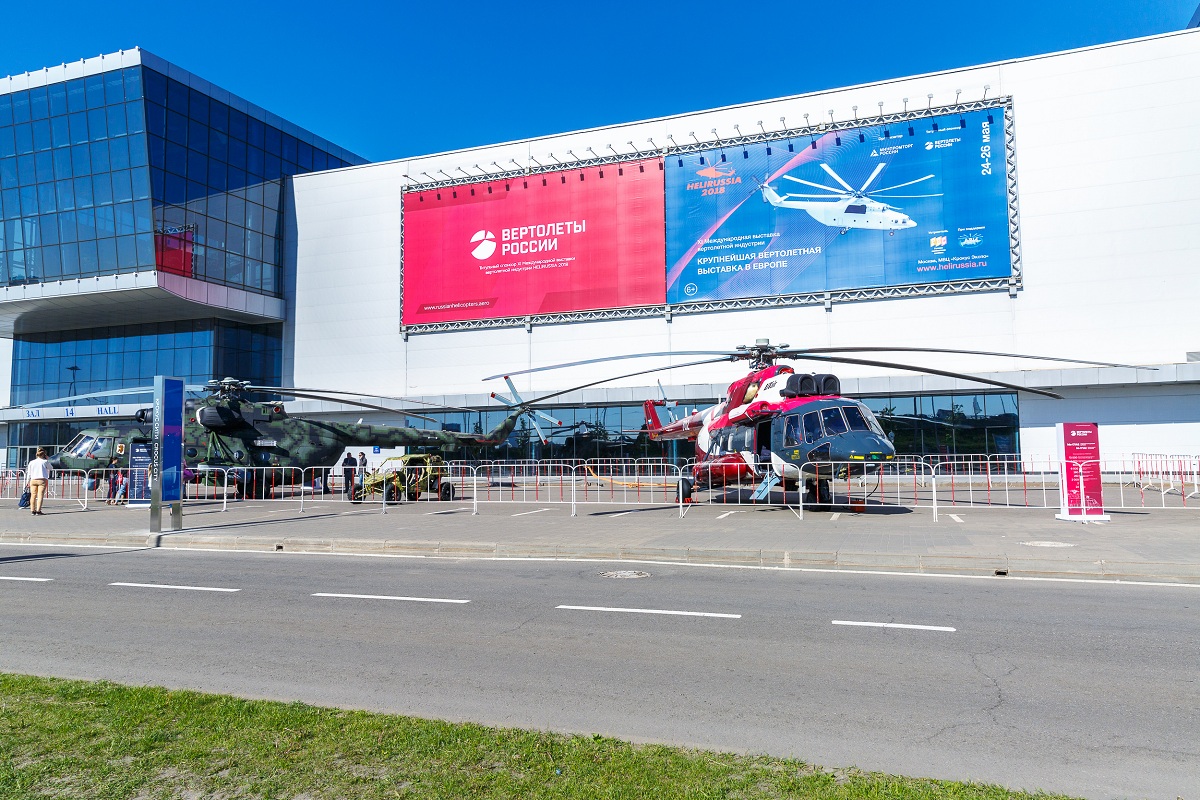 Among the international exhibitors, the biggest novelties were the Bell 505 Jet Ranger X and new Anteo helicopter powerplant from Safran Helicopter Engines. Also the development of Russian-French cooperation should be noted: the joint stand of the French companies was again presented under the auspices of the French Association of Aerospace Industry (GIFAS). 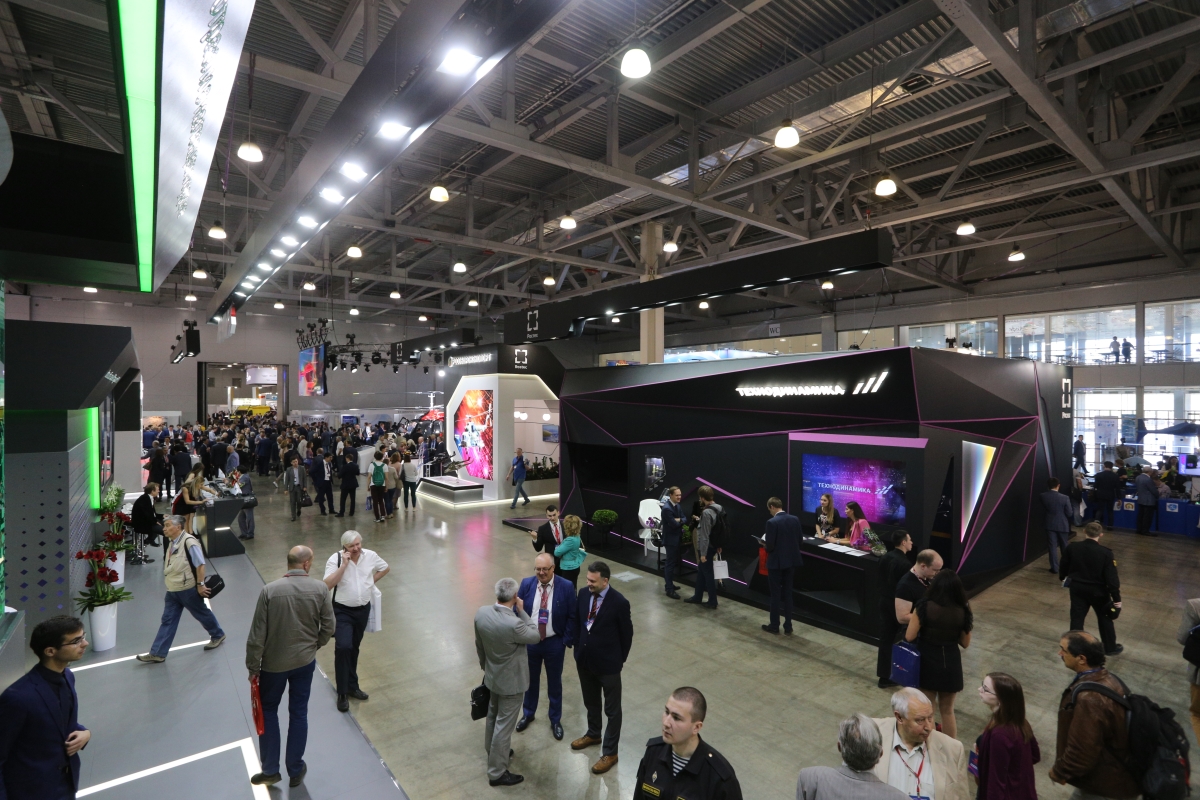 A production model of Bell 505 Jet Ranger X, first in Russia, was be showcased at the Bell and Jet Transfer booth, the last one being Bell’s official representative in Russia. Bell 505 Jet Ranger X is a new five-seat aircraft designed for safety, efficiency and reliability. It is equipped with Safran Helicopter Engines Arrius 2R engine with dual channel FADEC, a fully integrated glass deck featuring the Garmin G1000H avionics that provides unparalleled crew situational awareness and reduces pilot workload. 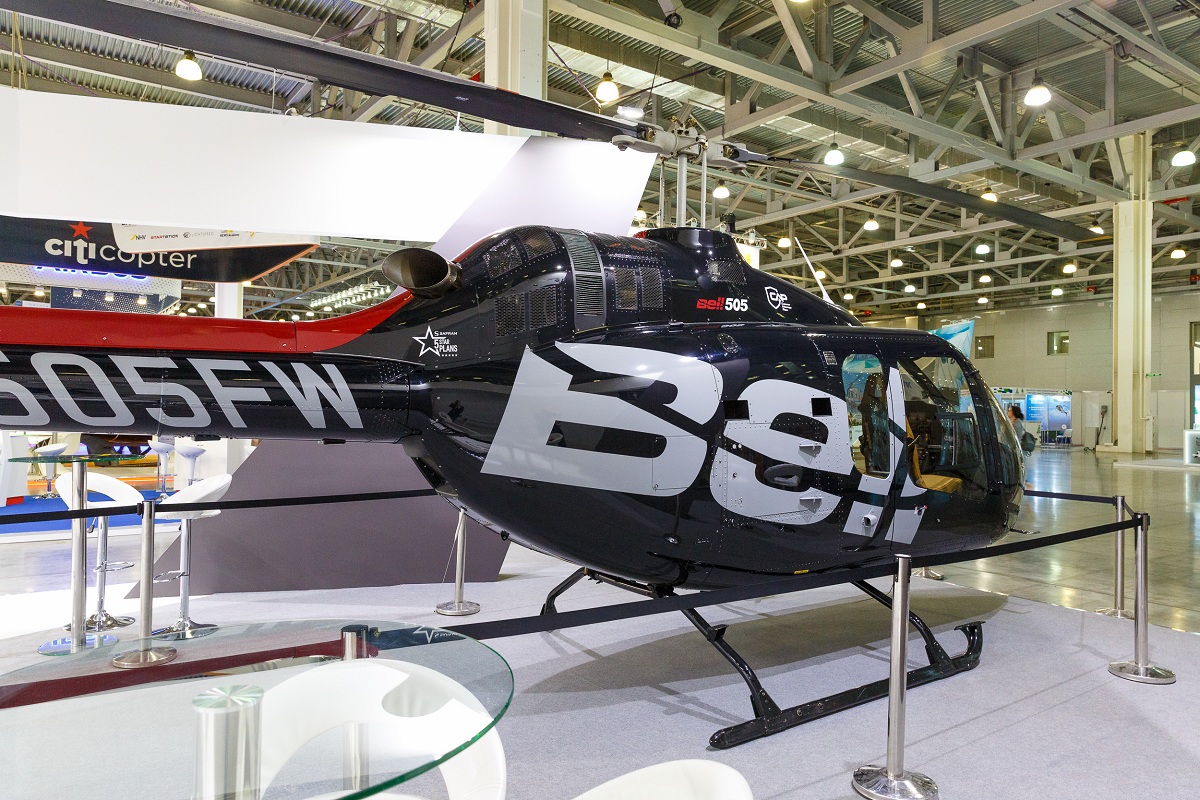 Bell 505’s range is 566 km with max cruise speed at 231 km/h and 680 kg of useful load. In 2017, the Bell 505 Jet Ranger X have received FAA and EASA certification and later was certified in several countries around the globe. As it was told at HeliRussia 2018, the certification in Russia is expected this summer with deliveries to follow right after. To date, 100 helicopters of this model have been delivered and over 300 ordered worldwide, including several firm orders in Russia. In particular, the Ural Works of Civil Aviation (UWCA), which is also participates in HeliRussia 2018, will receive the first imported helicopter. UWCA is Bell’s partner in the Bell 407GXP licensed production at the company’s plant in Sverdlovsk Region, Russia. 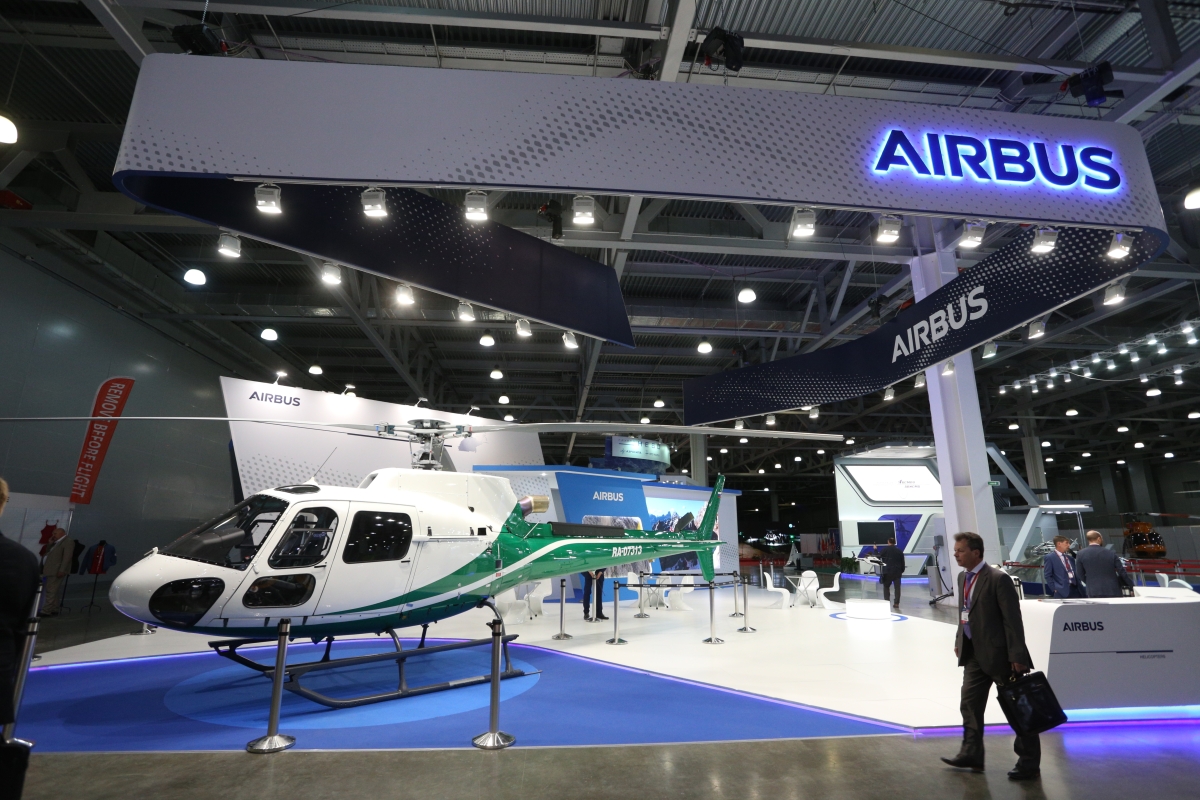 The Garmin-based avionics of the H125 eases pilot’s work, which positively affects the level of flight safety. Also while using the G500H and GTN 650H systems, the main flight information is duplicated on additional regular indicators. Garmin-based avionics supports  connection of additional equipment, like an autopilot, radio altimeter, blind zone cameras as well as mobile devices to update the map databases and transfer the pre-prepared flight plan.

At informed at HeliRussia 2018, the H125 is in high demand in Russia with more than 70 units in operation. Among the companies operating H125 are the leading regional operators, like Aerogeo, AltaiAvia, Vostok, SKOL, UTair Helicopters and Yamal.

Moreover, Airbus Helicopters announced the approval of Russian-made GLONASS receiver for H130 type helicopters at HeliRussia 2018. The receivers are developed by Ramenskoe Instrument Design Bureau (part of KRET corporation). The Russian TSS receiver is certified according to the EASA standards and Russian Federal Air Transport Agency as an auxiliary source of navigational data. The device can be installed as an option.

“Airbus Helicopters is the first foreign manufacturer of helicopters in Russia, which received approval to equip its helicopters with Russian-made GLONASS units. The first model is approved to be used on H135 in 2010, and half of the Russian fleet of H135 helicopters is now equipped with it, – said Thomas Zeman, CEO of Airbus Helicopters Vostok. – Along with Ramenskoe Instrument Design Bureau we followed the directives of the Russian aviation authorities to create a transceiver, supplied as a factory option for H130 helicopters. We expect to see interest in this device on the market and are ready to certify it for other types of helicopters, starting with H125.”

Exclases Holdings, the exclusive distributor of the Leonardo Helicopters in Russia, introduced the AW109 Grand New in the VIP configuration. This is a new generation of AW109 type. Its equipment includes a “glass cockpit” avionics, a 4-axis digital autopilot and two Pratt & Whitney Canada PW207C turboshafts. The AW109 Grand New provides the highest level of safety and efficiency. 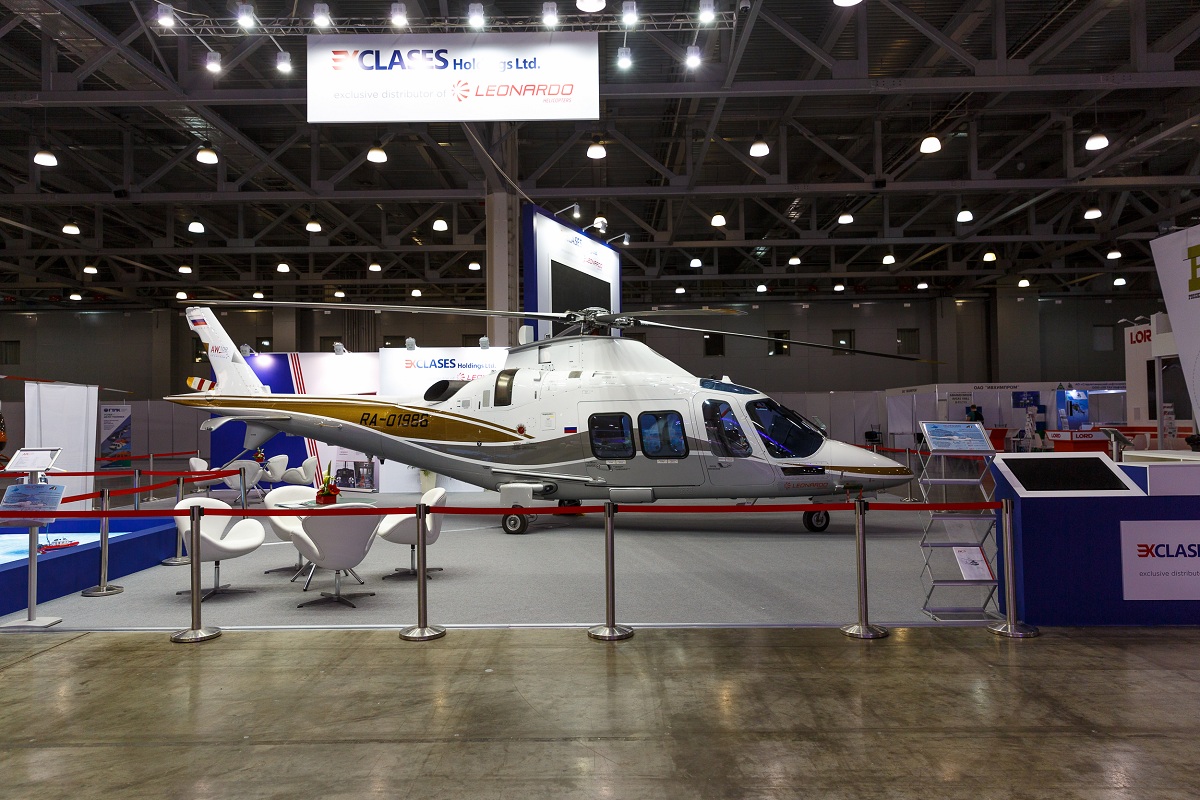 As always, the AW139 was featured at HeliRussia in 2018. This model is locally produced in Russia by HeliVert, a joint Russian-Italian company, founded by Leonardo Helicopters and the Russian Helicopters. Russian customers have received more than 30 AW139s since 2012.

The FirstFlight virtual interactive procedural trainer by Leonardo Helicopters was another novelity at HeliRussia 2018. It is state-of-the-art reconfigurable cockpit trainer that uses advanced graphics and touchscreen technology to reproduce the helicopter cockpit. It enables pilots and crew to familiarize themselves with the helicopter controls and avionics systems to enhance procedural proficiency in an efficient, timely and cost effective manner.

For the first time in Russia, CH-77 Ranabot ultralight single was displayed at HeliRussia 2018. This is a light two-seater helicopter, developed by Italian manufacturer Heli-Sport, which is ideal for private use and piloting training. The model demonstrated at the stand of Agan Aircraft Group.

The world leading manufacturer of rotorcraft turbines from France, Safran Helicopter Engines, for the first time in Russia showcased Anteo – the new helicopter turboshaft engine. It was displayed at HeliRussia 2018 as a full-scale mock-up.

As it was noted at HeliRussia 2018, Aneto-1K, the first 2,500 shp model, has been selected by Leonardo Helicopters to power its new twin-engine AW189K. Maiden flight of this helicopter took place on March 2017. Its EASA certification being scheduled for fourth quarter of 2018 while powerplant’s EASA certification will meet this timetable.

Also, Airbus Helicopters has selected Aneto-1X to power its Racer (Rapid and Cost-Efficient Rotorcraft) high-speed demonstrator. Twin engines will contribute significantly to the new rotorcraft’s cruise speed performance of up to 400 kph.

In particular, Donaldson’s Aerospace showcased Its air filters and housings, fuel, oil and hydraulic filters, as well as filters for air pressurization units and ozone converters. The company’s products are used on a wide range of helicopters, other aircraft and machinery.

France is one of the well-established contributing countries of HeliRussia and French companies are actively cooperating with its Russian counterparts.

In addition, foreign companies demonstrated on HeliRussia 2018 a wide range of additional and auxiliary equipment. Tools and equipment were exhibited by TaeguTec (Republic of Korea) and Aces International (Australia). Software for the helicopter industry was presented by ALD (Israel). Helitowcart (Canada) showed ground transportation units for helicopters, and United Rotorcraft (USA) equipment for medevac helicopters. 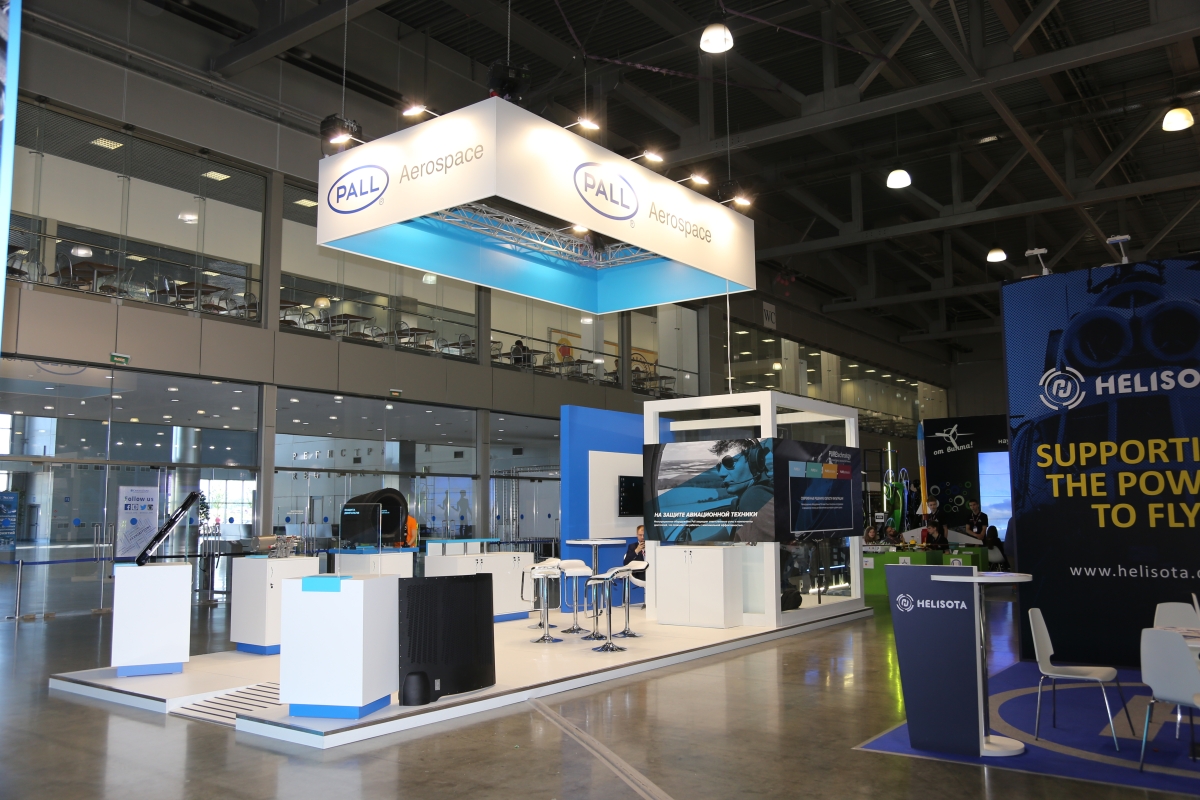 For the first time, the aviation training center Helipoland (Poland) was presented at the expo. It offers piloting training and provides European certificates. Helipoland trains pilots for Robinson R44 and R66, Airbus Helicopters H120, H130 and AS350, as well as Bell 206 and Bell 407.

RHOTHETA Elektronik (Germany) presented its experience in design, development and production of high-quality airborne direction finders to support different missions. Company provides lightweight and compact design are as important as reliability and robustness.

HeliRussia 2018 featured an active international activity. Its role of a sole regional helicopter event and traditional high level of worldwide cooperation in aerospace industry strongly contributed to this fact. Results this year’s expo allows to predict assured foreign participation in HeliRussia 2019, which will run through May 16-19 next year in Russia.